ACGME Home > About Us > Board and Staff > Executive and Senior Leadership > Cathy Nace, MD 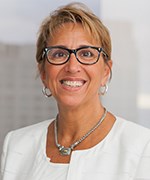 Cathy Nace, MD is a board-certified obstetrician-gynecologist who received her medical degree from Uniformed Services University in Bethesda, Maryland and completed her residency at Madigan Army Medical Center in Tacoma, Washington. During her more than 25-year Army medical career, Dr. Nace served as Department Chief of Obstetrics and Gynecology at the Army Medical Center in Landstuhl, Germany, Chief of Gynecology at Walter Reed Army Medical Center, Director of Medical Education at Walter Reed, and Vice President for Education, Training, and Research at the integrated Army-Navy Walter Reed National Military Medical Center in Bethesda, Maryland. From 2012 to 2015, Dr. Nace was the Director of Medical Education in the Office of the Surgeon General of the US Army in Falls Church, Virginia, where she was responsible for more than 150 Army graduate medical education programs across the country with over 1,500 residents, as well as nearly 1,800 medical students in the Army’s Health Professions Scholarship Program.

Clinically active, she has been on the faculty of the obstetrics and gynecology residency at Walter Reed and was assistant professor at Uniformed Services University of the Health Sciences on the Walter Reed campus. She was an oral board examiner for the American Board of Obstetrics and Gynecology for 10 years. Dr. Nace served as the Consultant for Women’s Health to the Army Surgeon General, and has received several leadership awards, including the American Congress of Obstetricians and Gynecologists’ Zimmerman Award for Leadership and the Military Health System’s Women Physician’s Senior Leadership Award. She has numerous Army commendations, including two Legion of Merit awards and five Meritorious Service Medals, and has been recognized for her achievements and leadership with the Army’s “Professor” equivalent, the “A” designator.

Dr. Nace joined the ACGME Accreditation Field Staff upon her retirement from the Army in May 2015 and has conducted more than 250 site visits to programs in the US, as well as to locations where ACGME-I provides accreditation services. She was appointed as the Vice President, Field Activities in March 2020.