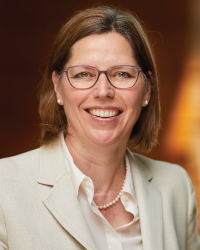 Mary E. Klingensmith, MD has joined the ACGME as the Senior Vice President, Accreditation. In her role, Dr. Klingensmith will oversee the accreditation process and standards for ACGME-accredited residency and fellowship programs across the country. She will also work closely with ACGME Executive Directors to provide support to Review Committees regarding accreditation policies and procedures, act as a liaison to other graduate medical education (GME) organizations and agencies, participate in the education and support of program directors and coordinators, and more.

Prior to joining the ACGME, Dr. Klingensmith was the Mary Culver Distinguished Professor of Surgery, practicing general surgery at Barnes-Jewish Hospital and the John Cochran VA Medical Center, and Vice Chair for Education in the Department of Surgery at Washington University School of Medicine in St. Louis, Missouri. She was a steward of medical education and physician training in her role as Vice Chair, in which she oversaw medical student education, four ACGME-accredited residency programs, and 14 fellowships.

During her time at Washington University, Dr. Klingensmith founded the Washington University Institute for Surgical Education (WISE) surgical skills lab, where surgery residents can augment their learning and surgical techniques. The lab also provides training for medical students, allied health professionals, nurses, physicians, and residents from multiple disciplines. Dr. Klingensmith was also associate director of the Wood Simulation Center, designed to teach skills to students and residents in a low-stress environment, and founding director of the Academy of Educators, an institutional collaboration of educators.

Dr. Klingensmith was elected to the Board of Directors of the American Board of Surgery (ABS) in 2011 and was named ABS vice president and editor-in-chief for SCORE®, a non-profit consortium of organizations involved in US surgical education, in 2019. During her tenure as ABS Board Chair, Dr. Klingensmith oversaw the development and roll-out of both the Continuous Certification Program and the pilot of competency-based education using entrustable professional activities, while also leading the ABS through a strategic planning process, which culminated in a new governance structure for the organization. She is also a past president of the Association for Surgical Education and a board member of the Association of Program Directors in Surgery.

She has received several awards, honors, and positions of distinction throughout her career, including the ACGME Parker J. Palmer Courage to Teach Award (presented to innovative program directors dedicated to successful resident education), the Partners Medical Education Alumna Educator Award (recognizing Mass General Brigham alumna who have had an important national impact on medical education), and the Philip J. Wolfson Outstanding Teacher Award from the Association for Surgical Education.