The History of the ACGME Conference 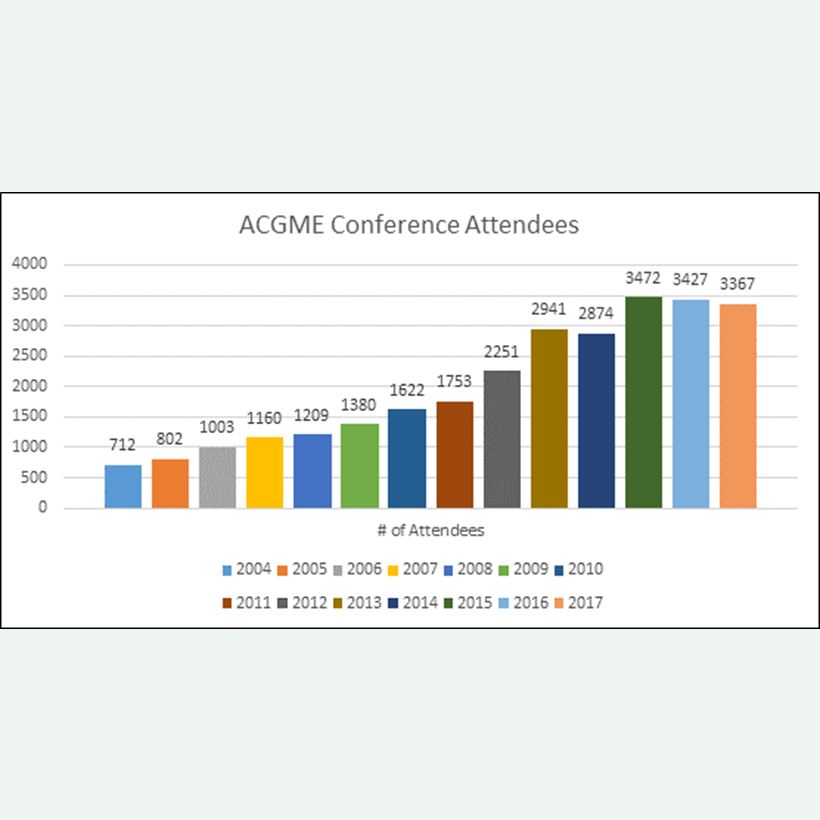 The Early Years
If you were working in GME back in the 80s, maybe you attended one of the ACGME’s early forerunners of the Annual Educational Conference. In the 80s and 90s, when we accredited 6600 programs (we were not yet accrediting Sponsoring Institutions) affecting 90,000 residents and fellows, the ACGME offered annual workshops in March called Mastering the Accreditation Process. These one to one-and-a-half-day workshops focused on general accreditation topics, such as how to apply, completing the Program Information Forms (remember those!?), and preparing for a site visit. The workshops were offered twice in 1990 to satisfy demand—200 registrants for each workshop!

Growing Out of Chicago

By 2004, the ACGME was accrediting 8,037 programs affecting 101,810 residents and fellows. The leadership team realized that the growth of the ACGME and its new initiatives was not reflected in the program’s content. The decision was made to revamp the workshop and form an ACGME Annual Educational Conference that would include, in addition to the accreditation portion, outside speakers knowledgeable in areas such as the newly-developed Competencies, assessment, and outcomes. After maxing out at the Hyatt McCormick, and looking to expand the conference, leadership opted to take the conference out of Chicago. Nearly 1,000 people attended the 2005 Annual Educational Conference, held March 3-5 at the Gaylord Palms Resort and Convention Center in Kissimmee, Florida (from 712 in 2004).

The 2007 and 2008 conferences continued to grow with the GME world. Topics covered were relevant to accreditation and all that it encompassed. In 2008, the conference moved to the Gaylord Texan in Grapevine, Texas.

Under the leadership of our new CEO, Dr. Thomas Nasca, the Department of Education was formed in 2008. Dr. Timothy Brigham was named Senior Vice President, Education and took over the reins for, among many other duties, the ACGME Annual Educational Conference. Dr. Brigham formed the Division of Educational Activities in August 2008, and planning for the 2009 and subsequent conferences would move in a new direction.

The agenda for the 2009 conference changed significantly. In addition to the “core” sessions that were repeated every year, we solicited submissions from the GME community. The response was overwhelming and resulted in an in-depth representation of topics relevant to the community at-large. Prior to the start of the conference, a workshop for new program directors and coordinators and a workshop on duty hours were held. They were received enthusiastically by attendees. The conference theme, Shaping the Future, resonated with the group as well, as attendees wanted to gain knowledge about where the ACGME was going. Eighty-two sessions were offered, attracting 1380 attendees. Dr. K. Anders Ericsson delivered a stimulating keynote address on deliberative practice and mastery, which complemented the ACGME Competencies and the ideas beginning to surface for formal milestones in residency education.

The Advent of the Pre-Conference

By 2010, the ACGME was accrediting 8,814 programs affecting 111,386 residents and fellows, and as those numbers grew, so did the number of attendees at the Annual Conference. From 2010 to the present, the conference has followed the same general format, but continued to expand to offer relevant topics and increase in attendance. In 2010, we topped out at 1500 attendees. The main focus was on supervision and patient safety. A workshop on supervision held prior to the start of the conference received strong evaluations and was well attended. Pre-conferences were offered for new program directors and coordinators, as well as a new course for designated institutional officials (DIOs). The body of the conference, themed Transitions in Change, featured Dr. Carolyn Clancy, an expert on patient safety, as the keynote speaker, and included many interesting sessions from the GME community. The three-hour mini-course piloted that year was very successful, and these have been included ever since.

The 2011 conference piloted a Coordinator Forum, designed for coordinators at all levels. It featured plenary sessions and workshop choices selected from the coordinator community. Four hundred attended the Forum that year. That number has risen to between 1100-1300 since. This will be the eighth year we host the Coordinator Forum.

From 2011 to 2017, we continued to offer sessions designed to highlight the newest foci in accreditation, as well as a selection of topical sessions from the GME community. On July 1, 2013, the Next Accreditation System was implemented, and sessions were designed to prepare the community for this huge change in GME accreditation. Also during this period, the Milestones were developed for each specialty, and many sessions, especially those offered by the community, focused on assessment, feedback, and the effectiveness of the Milestones overall. The number of pre-conferences has also grown, including an osteopathic-focused one that began in concert with the start of the transition to a single accreditation system in 2015. With the rise of social media, the ACGME leveraged its new (in 2015) Twitter and LinkedIn accounts (@acgme) to reach even more of the GME community—beyond the walls of the convention center. We continue to expand and look for more way to engage and connect with those who share in our mission.

Today
The ACGME Annual Educational Conference now welcomes approximately 3,500 attendees from all arenas of graduate medical education annually, and from across the globe. The ACGME accredited approximately 10,700 programs in the 2016-2017 academic year, reaching approximately 130,000 residents and fellows. Our 2018 blog pilot is our latest attempt to reach as many of you as possible. What would you like to see on an ACGME blog?