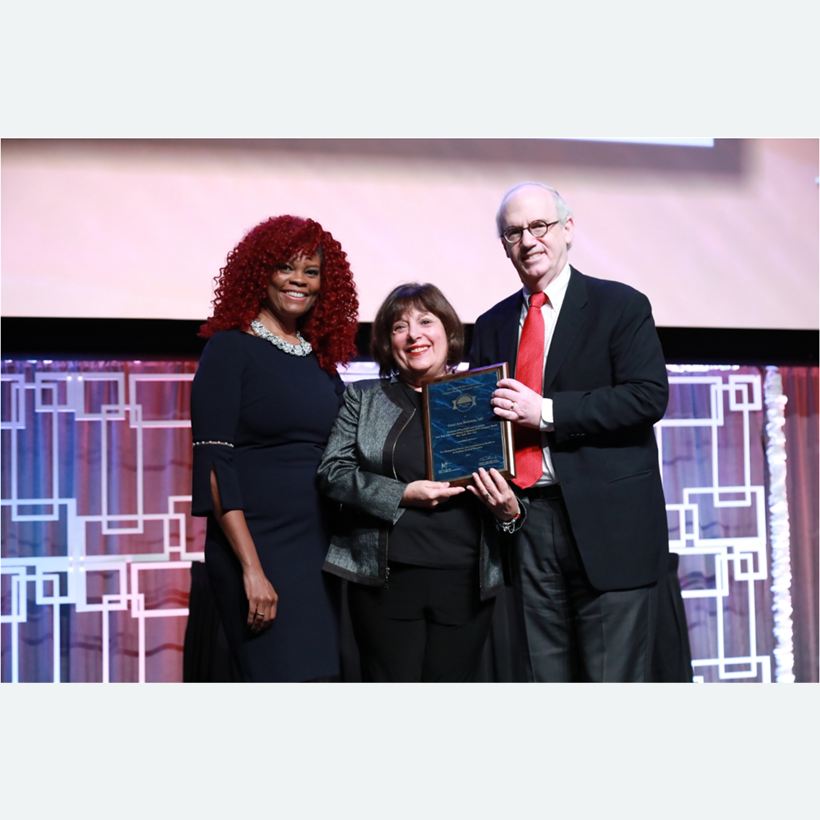 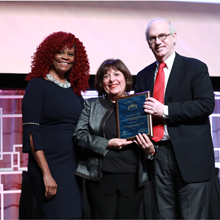 The ACGME’s John C. Gienapp Award is named for Dr. John Gienapp, who was the ACGME’s Executive Director for 19 years during which time he made several important contributions to graduate medical education and ACGME accreditation. Upon his retirement, this award was established to recognize those who, like himself, have dedicated themselves to a career in graduate medical education and made outstanding contributions to residency and fellowship education and ACGME activities. Here at the ACGME, we affectionately refer to the Gienapp Award as the GME Lifetime Achievement Award!

Dr. Carol A. Bernstein is the 2019 winner of the John C. Gienapp Awardee and the first ever woman to be honored with the award--on International Woman's Day to boot! Dr. Bernstein is Professor of Psychiatry and Neurology at New York University. She has spent her entire career engaged in the education and mentorship of the next generation of physicians in addition to maintaining a clinical practice in general psychiatry at the New York University School of Medicine.

Dr. Bernstein is a most deserving honoree, with a career that exemplifies the commitment to graduate medical education the John C. Gienapp Award was established to recognize. We spent a few minutes with Dr. Bernstein, talking about her award and her career.

ACGME: You have had many accomplishments throughout your career. How do you feel about receiving the Gienapp Award?

CB: I am deeply honored and grateful to be receiving this award. I have devoted my entire career in medicine to the education and training of the next generation of physicians and it is especially rewarding to be acknowledged in this way at this stage of my career and by my colleagues at the ACGME for whom I have the utmost regard and respect.

ACGME: What do you think is one of your greatest contributions to GME?

CB: There are two contributions of which I am extremely proud. The most important has been my work with hundreds of house officers whom I have had the privilege of training and who are now making major contributions to medicine throughout the United States. Secondly, it has been uniquely rewarding to work with ACGME leadership as we approach the task of changing the culture of medicine and reducing burnout and stress among health care providers.

ACGME: What roles have you had with the ACGME? What drove you to collaborate with our organization?

CB: In 1996, I was appointed to the Review Committee for Psychiatry and found that to be an incredibly important way to contribute to graduate medical education in psychiatry, especially since the Review Committee was in the process of revising the Program Requirements. Subsequently, I chaired a task force on institutional accreditation at my institution and became the first Associate Dean for Graduate Medical Education, as well as the DIO. In 2010, I was appointed to the ACGME Board of Directors, and I served on the Executive Committee. In the wake of two intern suicides in New York in 2014, I became very involved in ACGME efforts to address the crisis of burnout, stress, depression, and suicide among physicians. I should add that the inspiring leadership of Dr. Thomas Nasca is one of the reasons that my work with the ACGME is so gratifying.

ACGME: One area in which you have done a lot is physician well-being, which as you note is an area of great importance to the ACGME. Can you tell us more about your work and passion in this area?

CB: When the tragedies happened in New York in 2014, three medical schools (including my own) were directly impacted by the events. I saw this as a unique opportunity to help physicians care for themselves so that they could take better care of their patients. As a psychiatrist, I have been deeply affected by the stigma directed towards patients with mental illnesses, and have also spent much of my career trying to help educate the general public about the “treatability” of these conditions. It is also evident, that until now, there has been particular stigma among physicians with regard to seeking treatment, both because of the belief that we can “treat ourselves” and because of fear that seeking treatment will inevitably lead to problems with licensing and credentialing. In addition, the very qualities that make physicians good at their jobs – obsessive attention to detail, willingness to put the patient first, a constant striving to improve patient care and help our patients get better – contribute to difficulties in seeking treatment ourselves. Another way to describe this is as a climate of “maladaptive perfectionism.” The very nature of medicine leaves little room for “mistakes,” and the culture frequently engenders feelings of shame and humiliation when mistakes do occur.

ACGME: How many times have you attended the ACGME Annual Educational Conference, and what has been the most meaningful part for you?

CB: I have attended seven or eight of the ACGME conferences in recent years. The program is a wonderful opportunity to learn about new creative ideas in graduate medical education, as well as to network with colleagues – one of the most meaningful aspects of the meeting.

ACGME: Is there anything else you would like to add for our readers?
CB: The ACGME has become an organization that is about much more than just accreditation.  It stands at the forefront of groups trying to enhance the education of the next generation of physicians through meaningful efforts to use the accreditation process to help change the current culture of medicine and return it to the principals embodied in the Hippocratic Oath.