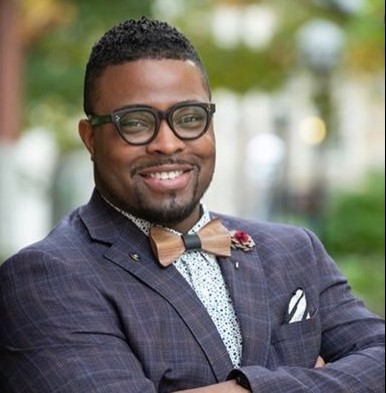 Dr. Oluwaferanmi Okanlami, director of Student Accessibility and Accommodation Services at the University of Michigan, and professor of family medicine, physical medicine and rehabilitation, and urology at Michigan Medicine, and adjunct assistant professor of orthopaedic surgery at the David Geffen School of Medicine at UCLA delivered a powerful Closing Plenary for the 2022 ACGME Annual Educational Conference.

“We are more alike, my friends, than we are unalike.” --Maya Angelou, quoted by Dr. Oluwaferanmi Okanlami.

The 2022 ACGME Annual Educational Conference concluded with a fascinating, inspiring, and at times surprising Closing Plenary by Dr. Oluwaferanmi Okanlami. “Dr. O” is the director of Student Accessibility and Accommodation Services at the University of Michigan, where he oversees the Office of Services for Students with Disabilities, two testing accommodation centers, and the Adaptive Sports and Fitness program. He is also an assistant professor of family medicine, physical medicine and rehabilitation, and urology at Michigan Medicine and an adjunct assistant professor of orthopaedic surgery at the David Geffen School of Medicine at the University of California Los Angeles (UCLA).

Introduced by ACGME Chief Diversity, Equity, and Inclusion (DEI) Officer William McDade, MD, PhD, Dr. Okanlami shared his personal story, which is foundational to his message and personal professional mission. He was born in Nigeria before immigrating to the US at an early age. He attended Stanford University, where he ran track and field, serving as captain his last two seasons and achieving Academic All-American recognition. He attended medical school at the University of Michigan and went onto an orthopaedic surgery residency at Yale Uniersity. He went on to earn a master’s degree in engineering, science, and technology entrepreneurship from the University of Notre Dame, and completed his family medicine residency at Memorial Hospital in South Bend, Indiana.

During his third year of his orthopaedic surgery residency at Yale, Dr. Okanlami was in an accident that resulted in his being a wheelchair user. Thus, as a disabled, Black, Nigerian, immigrant, cis-gender, heterosexual, male, physician, athlete, and director, Dr. Okanlami wove multiple narratives together as he discussed his own struggle to define his personal and professional identity through a framework of intersectionality.

Dr. Okanlami began with an engaging, in-depth discussion of the differences between equity and equality using a well-recognized cartoon of three people behind a fence that surrounds a baseball field. Equality, he said, would not necessarily mean that those who are differently abled could see over the fence. Equity, on the other hand, means that no matter who you are, you are enabled to see over and beyond the fence. He emphasized that the goal should be to provide access, rather than making assumptions about what happened to people before they arrive.

“Do we always know what others have been through, what prejudices and discrimination they have faced, what opportunities they have been provided?” he asked. Diversity and inclusion, he said, is looking around to see who is not there, and then providing them with a seat at the table.

“Justice,” he said, suggesting just one interpretation of a fourth person added to the image, “is to remove the fence entirely.” Still, he noted, there are times when the fence may be necessary for those on one side of it. As long as we engage in conversation with people on both sides, he explained, we can still provide all with the access they deserve.

If we recognize that it is a shared goal to provide access, then each individual’s needs must be met. The resources to provide that access, though, said Dr. Okanlami, may not be the same for each individual. Therefore, we must strive to do everything we can to provide equitable access to everyone.

Dr. Okanlami admitted that prior to his accident he sometimes failed to recognize the inaccessibility that people with disabilities can face. He noted that people with disabilities are too often seen as the problem. Instead, there needs to be recognition that the problem is actually the environment. He urged the audience to acknowledge the reality of the space in which we sit, work, learn, and live.

He further noted that some people think they are “lowering the bar” if they accept individuals with disabilities into their programs. He argued against well-meaning faculty members who say they are not trying to exclude individuals with disabilities, but that the program would be doing them a disservice by putting them in a space where they are destined to fail. Dr. Okanlami pointed out that access is not an unfair advantage. “If you don’t have a seat at the table in the first place, then you’re never going to be able to demonstrate what it is that you can do.”

Dr. Okanlami shared his involvement in developing an adaptive sports and recreation initiative in Ann Arbor public schools. He helped to create a curriculum that allows every student to be involved. He challenged the audience with a question related to assumed (in)competence of children with disabilities: “When you see children with a disability as a patient, how often do you ask what sport they’re playing?” He recommended physicians use the health care system and the educational system to try to create change.

He concluded his plenary with a personal story of becoming friends with a national leader in graduate medical education, an individual with a record of accomplishment in promoting diversity in graduate medical education. As the two men researched their lives together and got to know one another, they found some surprising twists regarding this man’s ancestry and background, and realized certain similarities between them despite their differences, underscoring the Maya Angelou quote he shared, “We are more alike, my friends, than we are unalike.” People might not have expected this individual to be passionate about diversity because of what Dr. Okanlami called the “minority tax”: we expect only those who are part of minority groups to do the work of fighting discrimination. Dr. Okanlami emphasized, then, that people from majority groups must be allies, and not ask the marginalized to shoulder the burden themselves.

Dr. Okanlami ended his talk with a passionate plea not to let the DEI momentum drop off, challenging the audience by asking, and then warning: “What do YOU plan to do? The past may not be our fault, but the future will be.”