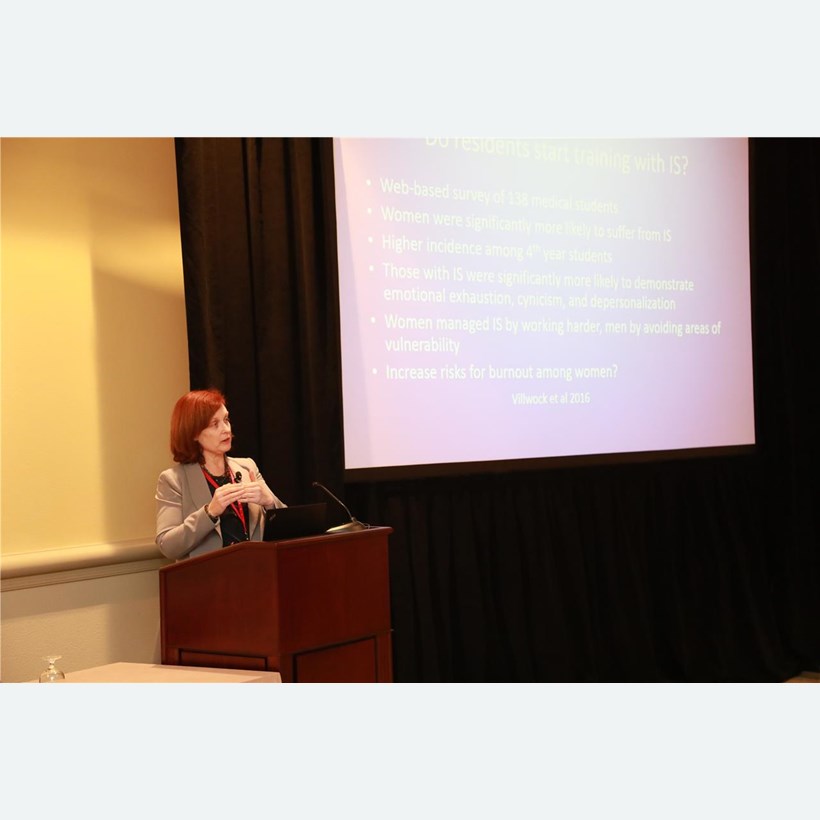 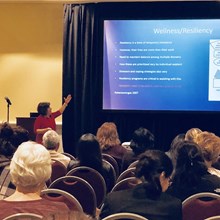 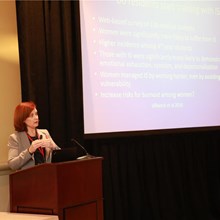 The ACGME’s and medical community’s prioritization of physician well-being made the issue a central of theme at the 2018 Annual Educational Conference. Gender-Specific Challenges in Burnout, a session led by speakers Carol Bernstein, MD and Kimberly Templeton, MD, explored a variety of factors that contribute specifically to the risk of burnout and differences between what men and women face in this arena.

Dr. Bernstein welcomed the room overflowing with attendees by defining burnout based on the Maslach Burnout Inventory, an introspective psychological inventory consisting of 22 items pertaining to occupational burnout, measured by three main areas: Emotional Exhaustion, Cynicism or Depersonalization, and Professional Efficacy/Accomplishment. She introduced a scale of understanding for how people generally address stress, and presented burnout rates by specialty that showed emergency medicine, family medicine, general internal medicine, and neurology have the highest rates.

So if burnout is just the tip of the iceberg, than what lies beneath? When it’s occurring, burnout can have numerous other implications that are not necessarily readily apparent. Several symptomatic factors, such as loss of professionalism, impact on education, less attention/increased risk of error, attrition from medicine, relationship issues, depression, substance abuse, and suicide could all be occurring or developing under the surface.

According to presentation findings, depression is more common in medical students and residents than the general population. A preliminary study showed that residents who experienced depression might be as much as six times more likely than non-affected controls to make medication errors. Other studies have confirmed the association of depression with self-perceived medication and other errors.

Dr. Templeton addressed burnout differences between men and women with the important caveat that differences can relate to a number of gender-based factors, such as social expectations, behaviors, what constitutes success for each gender, and more.

Women physicians experience several additional stressors that are nonexistent for their male counterparts. Women deal with a unique biological clock, preconceived beliefs that they must be better than their male colleagues to be equal, feelings of uneasiness with the perception of aggressiveness required to advance in their field, often being less comfortable with self-promotion, and frequent feelings that they receive little encouragement in their environments.

The concept of “Mother Transference” illuminated both a positive and possibly negative occurrence for women physicians. Women assume Mother Transference with characteristics as problem solvers, peacemakers, kindness, nurturing fixers, caretakers, but also through issues with delegating, being self-depreciating, and hesitancy with risk taking. This led to discussion of the debate over whether women physicians who spend more time with patients expend more emotional energy, and whether this may cause a problem in delegating patient care and/or with their own family responsibilities.

Additionally, a study of compassion fatigue, which is the physical/emotional distress caused by repeatedly caring for those experiencing trauma, was presented showing that female surgeons, more than those in all other specialties, exhibited significantly higher levels of burnout and compassion fatigue compared to male surgeons.

Both speakers shared additional study data showing that gender differences are easily understood between men and women physicians. One study showed no significant differences between male and female residents in incidence of burnout, but women were more likely to suffer from high fatigue and depression. Another study showed that out of 100 male and 98 female internal medicine residents, women were more likely to demonstrate emotional exhaustion and cynicism.

Another interesting pattern that differentiates women from men in terms of burnout is Imposter Syndrome. First described among women, but found in both women and men, Drs. Bernstein and Templeton explained that those who suffer from Imposter Syndrome believe themselves less intelligent or competent than how they are perceived by others. They also fear they are intellectual frauds, despite excellent evaluations and test scores. One might think this would be motivation to perform more effectively, but interestingly it can cause a sufferer to experience distress, depression, and anxiety, adding as an accelerant towards burnout for women.

The speakers also reminded attendees that while already challenging enough for women physicians and residents, additional issues, such as sexual harassment and gender-based discrimination in the workplace, also play a significant role in burnout.

Although many factors place woman at higher risk for burnout, many solutions to the problem were shared with the audience. Suggestions included providing a work environment with a support system, including mentors, access to professional development opportunities, resident resiliency/wellness programs, and implementing and ensuring a safe means of reporting harassment and discrimination. Personalized suggestions for coping with the issue of burnout among women in attendance were to exercise and perform self-care, understand and create boundaries between work and home lives, and learn to understand the emotional demands addressed for both genders.

The burnout session showed that emotional exhaustion tends to be higher among women. It was also revealed that there are key issues tying women uniquely to burnout, including Imposter Syndrome, stereotype perception, gendered expectations/external demands, and sexual harassment/(un)conscious gender bias.

Both male and female attendees of the session were spiritedly but earnestly reminded to consider their personal well-being first. A closing slide reminded all to “Secure your own oxygen mask before assisting others.”

Read more about the ACGME’s commitment to Physician Well-Being.